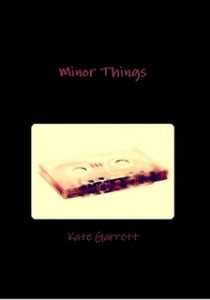 Minor Things by Kate Garrett proves to be more than the standard self-published fare. She begins by stating, “This is a mixtape, not a misery memoir” and hits play at birth in 1979. Each subsequent poem, or track, moves the reader through a song of her youth, from a stepfather with “the dead smile of a shark,” to the boys with their mixtapes:

Plastic castles of folk and rock,
industrial, grunge and hip hop. They gave
her the sound of second-hand shop clothes.
They handed over promises of something more
than home-grown apathy.

Like most great mixes, Minor Things is short, poignant, and to the point with its well-crafted tracks, each a part of the story. This is one self-published chapbook with a voice that’s worth listening to.

Kate Garrett writes poetry and flash fiction. Her work has recently appeared in fine publications such as Melancholy Hyperbole, MISO magazine, Boston Poetry, and FlashFlood, as well as several anthologies. Minor Things is her first book; her second book, Bewitched, is now available from Starshy.

Times Are Tough: Food Can Be a Comfort

a blog by Mia Mingus

“Nobody has ever measured, not even poets, how much the heart can hold.” ― Zelda Fitzgerald

this frenzy / like bees stinging the heart all morning Anne Sexton

a stressed out twenty-something who occasionally whores about

Christine Heppermann
THANK YOU FOR SWALLOWING

Reminding mean boys that big girls push back since 2015.