Birth of an Industry by Nicholas Sammond

There are several great reviews of Birth of an Industry: Blackface Minstrelsy and the Rise of American Animation by scholars in Media/Film, American, and African American Studies journals, but I did not see one published in Southern Studies journal as a book recommended to its scholars. I want to make a quick appeal to the field (which I admit is often absorbed into American Studies) to consider Sammond’s book, if not as a staple to the field, then as a very important secondary text for many of its scholars, especially for those with interests intersecting with the aforementioned fields.

The South explicitly makes an appearance in several places (although not the index) of Birth of an Industry. In chapter three, “Space,” Sammond traces how the inclusion of sound in film and animation “facilitated the production of a racial imaginary that deepened imagined links between Africa, the South, and black urban ghettos as a spatial continuum parallel to, yet separate from, that of an equally imagined white cosmos” (182). Or, as he points out while discussing Disney’s “Trader Mickey,” in chapter four, “Race,” “the paddle wheel on his [Mickey’s] boat could just as easily signal the old South as a colonial adventure in an African rain forest” (221).  And, as American blackface minstrelsy relies so heavily on the racial imaginations of slavery, The South runs through Birth of an Industry even when not invoked directly by name.

Further (forgive me for stating the obvious and to those who may have beaten me to the punch): Sammond directly employs reference to 1915’s cinematic success, The Birth of a Nation, as a lens through which to read his tracing of blackface minstrelsy from the birth of animation to present day simulacra of these performers. By grounding his discussion using a live action film, one that is not only deeply racist and sympathetic to the “Southern Plight” during reconstruction, but whose black characters were—you guessed it—white actors in blackface, he also signals, either consciously or unconsciously, to the reader that there is something southern about this discussion.

Minstrelsy, once a national past time, is now often seen as a (mostly) bygone southern past time. As Sammond covers in “Space,” animation is imagined space which often confronts, mirrors, or diverges greatly from real space in “complex negotiations” (136). The connotation Sammond’s title blankets over his work can be teased out, but in short, I find it very reminiscent of what Scott Romine and Jennifer Rae Greeson pinpoint in their introduction to Keywords for Southern Studies: “Indeed, one solution to any ‘southern problem’ … is to declare it a southern problem, not a national one. Imagined Souths have been used to contain problems ranging from poverty and racial oppression to cultural backwardness and religious fanaticism” (4). While Sammond does not directly thumb racism in animation as the fault of a south, as his title may imply, by wrapping up blackface minstrelsy in American animation with a Southern inspired titled, Sammond does invoke the idea that there is something very Southern about our cartoons’ racists histories and the spaces they create. A curious rhetorical move as the studios and animators largely discussed (Disney, Fleischer Studios, Winsor McCay, Warner Bros., etc.) produced their imagined spaces  out of studios housed on the coasts.

Overall, Sammond delivers what is promised: Birth of an Industry demonstrates how popular American animation has its roots in vaudeville stereotypes and blackface minstrelsy so that “the cartoon minstrel became vestigial” only to then share the stage alongside more explicitly racist caricatures during the swing era (139); how “the business of cartooning publicly celebrated and fetishized the work of cartooning” as well as mobilizing stereotypes so that they themselves became “a form of commodity fetish” (105; 244); and how humor manifests in the performative traditions of these cartoons. That the book is repetitive at times has its upsides. It is a fairly approachable read and each chapter is self-contained so those with specific research needs, such as in-depth discussion of labor in early animation (chapter two), will find Birth of an Industry not only useful but also practical.

If you are still not sure if you need to hunt down a copy of Birth of an Industry, check out the digital companion compiled by Alexei Taylor. It is a resource I wish I had found during my reading as it would have saved a lot of time searching YouTube for cartoon episodes. Broken down by every chapter and page, I imagine it is a good way to skim through the media Sammond covers in his discussion.

This post’s featured image is a still from 1932’s “Trader Mickey,” copyright Disney. 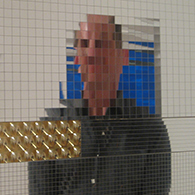 Nicholas Sammond is Associate Professor of Cinema Studies at the University of Toronto. He is the author of Babes in Tomorrowland: Walt Disney and the Making of the American Child, 1930-60, and the editor of Steel Chair to the Head: Essays on Professional Wrestling, both also published by Duke University Press.

Times Are Tough: Food Can Be a Comfort

a blog by Mia Mingus

“Nobody has ever measured, not even poets, how much the heart can hold.” ― Zelda Fitzgerald

this frenzy / like bees stinging the heart all morning Anne Sexton

a stressed out twenty-something who occasionally whores about

Christine Heppermann
THANK YOU FOR SWALLOWING

Reminding mean boys that big girls push back since 2015.